Detection solution of a foreign object in foods

With the demand for food safety and security, foreign materials in foods have been reported one after another, and more than half of them are organic. Many companies have succeeded in detecting inorganic objects such as metals and stones by introducing an X-ray computed tomography apparatus and a metal detector, cleaning foods, and reviewing processing processes, but they have not been able to detect organic foreign bodies such as hair and insects. Currently, hand-picking and visual inspections prevent organic foreign objects from being mixed into foods. However, there is also a problem of labor shortage in production lines, and the development of a device capable of automating the detection and removal of foreign objects has become an urgent issue. The purpose of this research is to develop a detection solution for foreign objects in foods that combines near-infrared light and polarization by also incorporating terahertz waves and machine learning, and then, finally aim for creating an automatic detection system that achieves a foreign object detection rate of 100%.​ 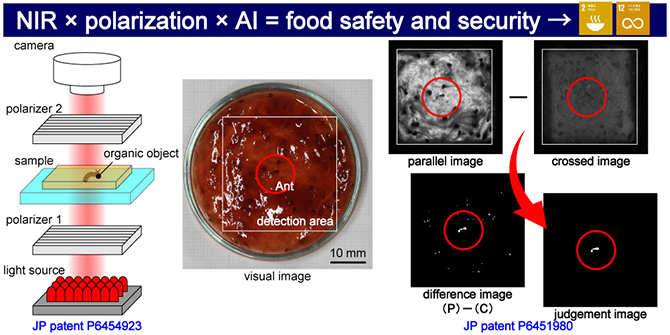